Israel: Hiking Masada and Floating in the Dead Sea 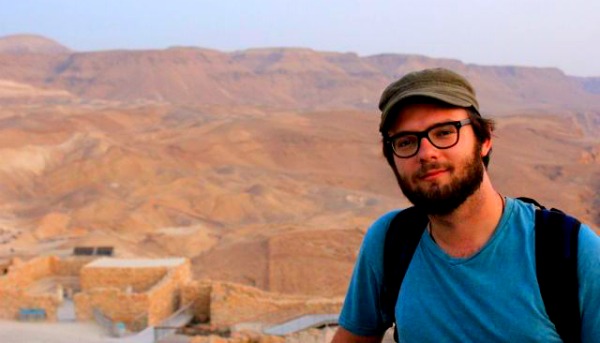 Last summer, I was lucky enough to be selected to go on a free trip to Israel through the Birthright Israel program. Not only that, but I was even luckier to be able to partake in a very special food-focused group, led by Israel Experts.

(This is the first in a series of posts about that trip and the beautiful, sometimes confounding home of the Jewish people.)

Of all the places on our whirlwind 10-day itinerary, I was probably least familiar with Masada, King Herod’s ancient fortress in the sky that was laid siege to by Romans during the First Jewish-Roman War.

Amazingly, Masada wasn’t excavated until the 1960s. In 2001, it was declared a UNESCO World Heritage Site. 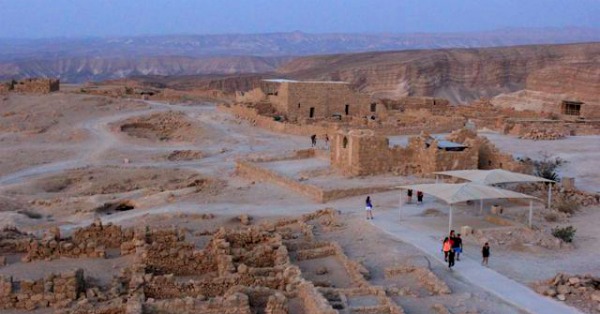 The night before hiking Masada, our group had a “desert experience” at Kfar Hanokdim, a sort of manufactured oasis in the Negev that serves as an introduction to Bedouin culture and tradition. 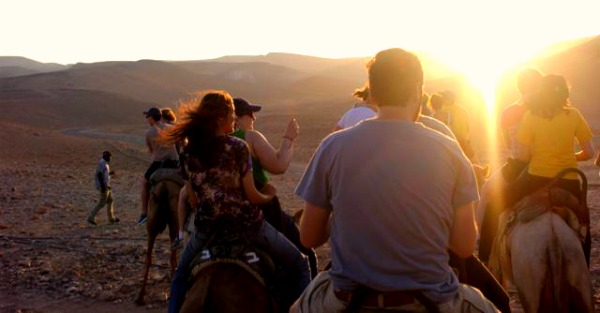 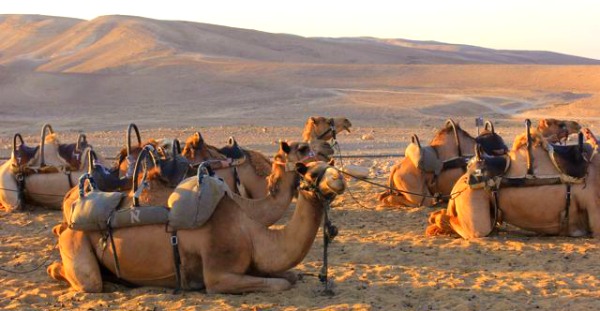 … and learned about the Bedouins’ curious coffee culture. (The Bedouins are a nomadic, tribal, desert-dwelling Arabic ethnic group who live a simple life dictated by honor and respect. Much of this is communicated through coffee. For example: If a Bedouin fills your coffee cup all the way, that’s their way of telling you that you aren’t welcome. On our way out to this “experience,” we passed some authentic Bedouin settlements, which look a lot like desert trailer parks.) 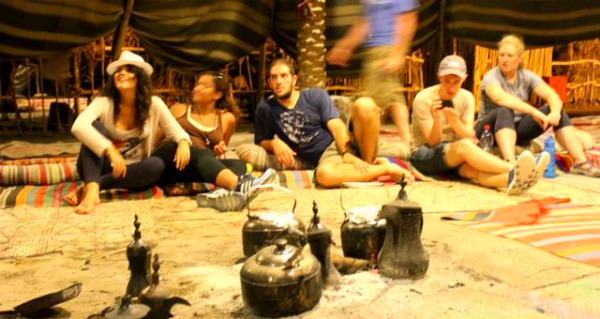 Our entire 45+ person group slept in the floor of a huge tent. Unfortunately, we weren’t the only group in the camp, and I was kept awake for far longer than I wanted to by a bunch of rowdy kids. Not the most comfortable night of sleep, either.

I awoke at 4 a.m. after a short, sleepless night. Our group quickly scarfed some biscuits and tea and loaded onto the bus for the harrowing bus ride in the darkness up to the entrance of Masada. 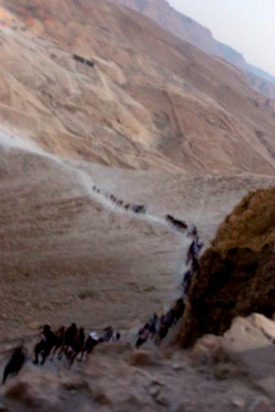 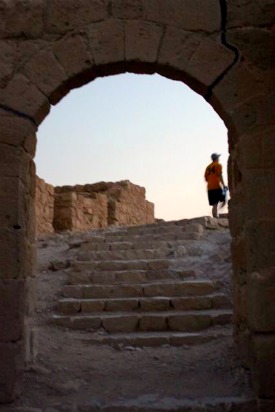 There are two ways to the top of Masada. We took the Roman path (used in the siege), which is quick but steep. It was enough to get my heart pumping. The sun had yet to rise and the surrounding bluffs looked endless, but the view was nothing compared to the majesty visible from the top of the plateau. 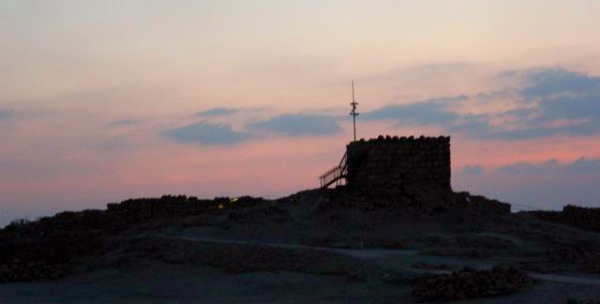 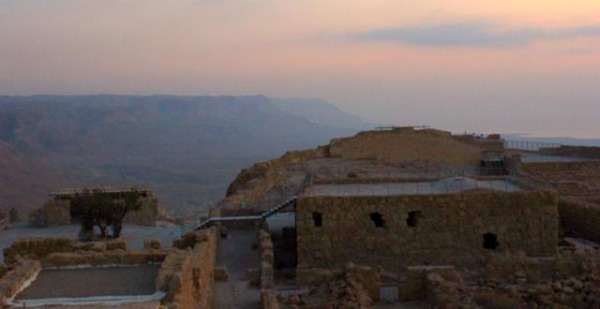 Herod had built a palace here while he killed off his wives and sons during a paranoid fit, worried they posed a threat to his power.

At the top of the mountain, the ruins of an ancient city are still partially preserved, and the views are absolutely stunning. 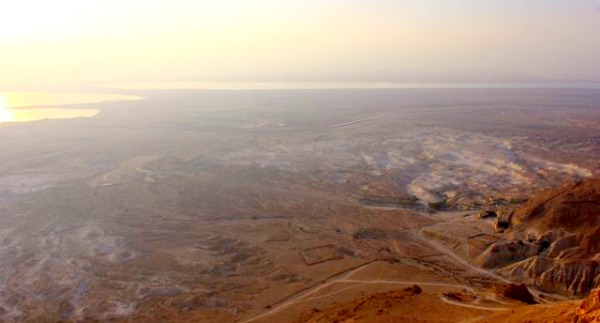 From the palace, you can see the lower terraces of the ancient city and the surrounding mountains, whose peaks begin 1200 feet below. It adds up to look like a hazy mountain sea, complete with salt deposits that look like snow.

From up there, you can get a sense of how megalomaniacal Herod must have felt with a view like that, as if he was on top of the world. 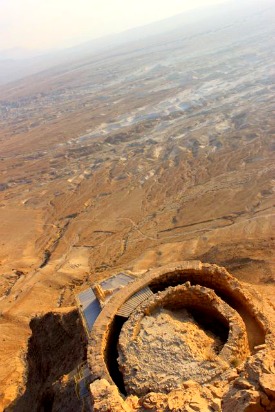 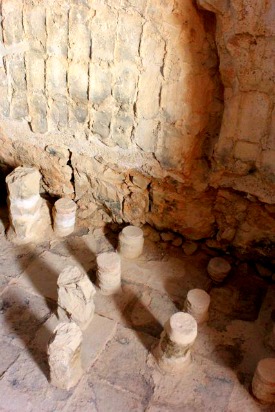 Portions of Herod’s bathhouses are still preserved. (His slaves would haul extra water up the side of the mountain to accommodate the Great King.)

From up there, I half-expected to hear the drone often accompanying movie scenes of Herod-like Roman empires. Instead, we all watched the sun rise over the nearby Dead Sea as we performed morning stretches. 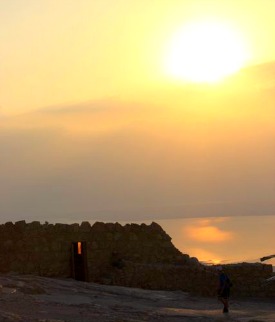 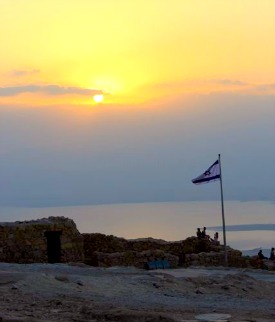 After the end of Herod’s reign, Jews occupied the ancient fortress. It became the final Jewish stronghold as the Romans conquered the area now known as Israel. You can still see the walls of the Roman camps from when they sieged Masada. 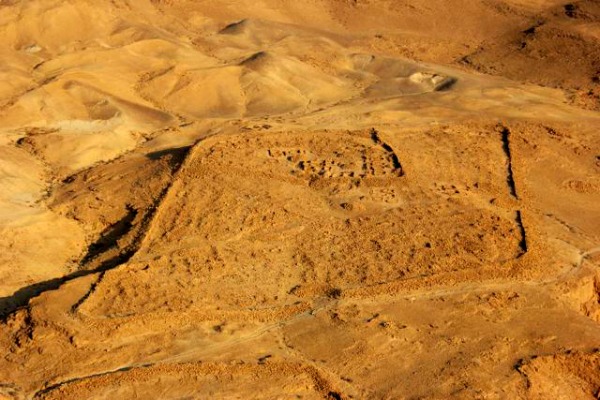 The hike down was actually more strenuous than the hike up. It was a winding trail made up of haphazard stairs and gravel. My legs and thighs buckled with each step — quite an unnerving experience, especially since the temperature had quickly climbed into the 90s with the morning sun. 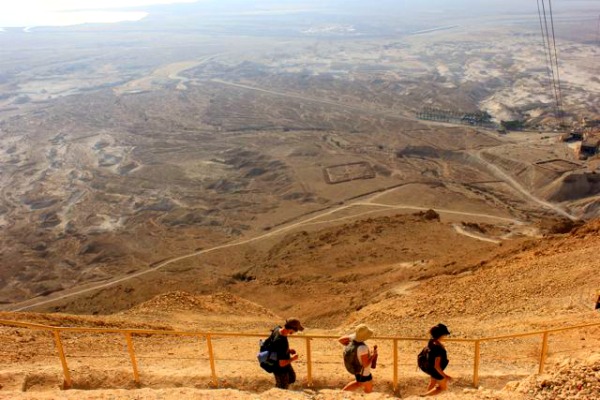 We didn’t have the option of taking the cable car up or down. But if you visit and have a hard time with strenuous activity, just know that it’s an option. 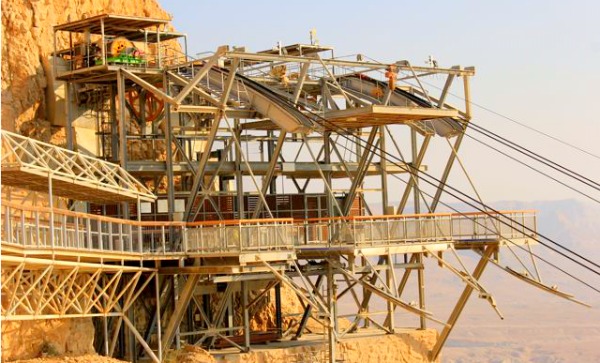 After a real breakfast and a quick cooldown in the air-conditioned cafe at the base of the mountain, we jumped back on the bus and headed for the Dead Sea.

What a strange experience that was! The water was hot and luminescent, and you could smell the sulphur from yards away. 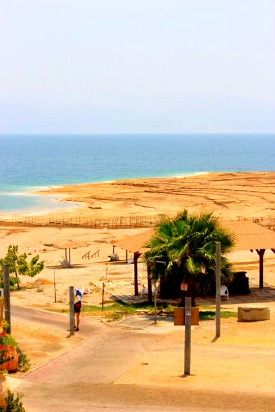 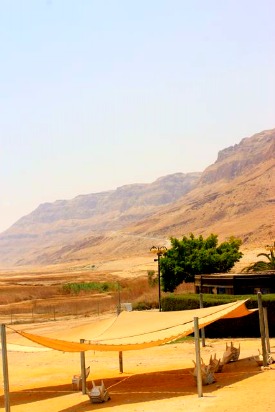 The thing about the Dead Sea is that it is incredibly salty. Think of the saltiest ocean you’ve ever been in, and then quadruple the amount of salt.

On the ride over, we were warned not to dunk our heads underwater or let loose any post-breakfast gasses while in the water.

I thought our handlers were being alarmist. But it bears repeating: The Dead Sea hurts.

The water is hot, and the extreme salt content will burn any hangnail or sore spot on your body. (In hindsight, it probably isn’t a good idea to do a camel ride the night before, if you catch my drift. And the toilet paper in the Bedouin tent was far from luxurious, as well.) 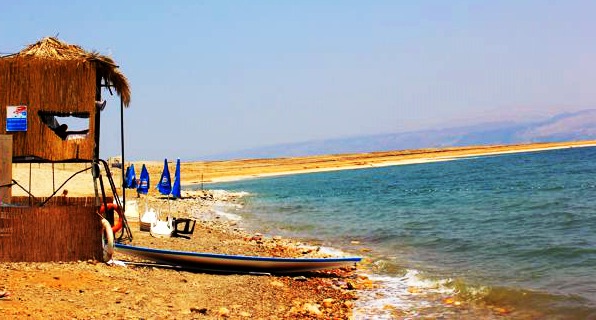 Still, it’s worth taking a quick dip in the Dead Sea — although “dip” is a bit of a misnomer. Try as you might to fight it, the salinity of the deepest spot on earth will cause you to bob and will put you on your back. It’s a really strange sensation. You can’t really swim in it, and it feels like you’re wearing a lifejacket.

I lasted maybe two minutes before the pain became too much to bear, so I rinsed off in the warm showers on the beach, spread Dead Sea mud all over myself, and baked in the sun before rinsing again. 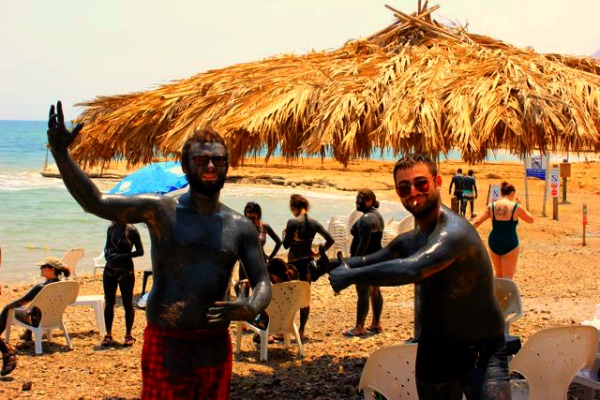 While I wouldn’t call the experience “pleasant” by any stretch, it’s such a weird, singular place that any visitors to Israel or Jordan need to stop off for a quick float.

Beware: In addition to the pain, the sulphur smell will haunt you. I had to toss a hat that I wore afterwards because — even after washing it — it smelled like rotten eggs.

We finished the night in port city of Jaffa. It all added up to one of the most memorable days of my life.

Check out my Israel trip video, which includes some scenes from Masada and the Dead Sea.

One afternoon, while staying with my parents in the small desert town of Mesquite, Nevada, Mark and I drove my …