Nevada Petroglyph Hike with the Friends of Gold Butte 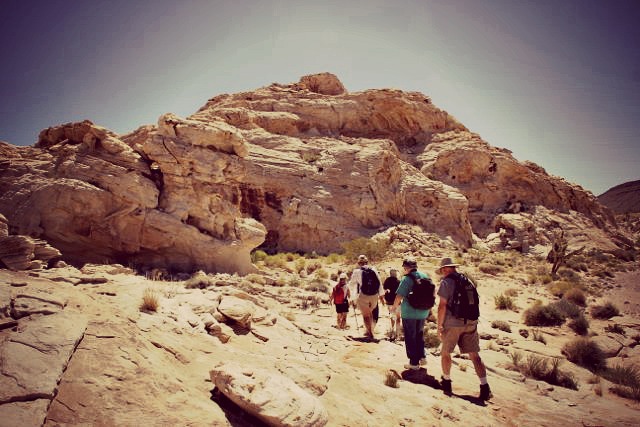 Last month, I went on a group hike with Katie’s dad through Gold Butte, a rocky portion of the Mojave Desert just south of the city of Mesquite.

The Gold Butte area is actually named after a small gold-mining town that used to exist there in the early 1900s. Today, it makes up some 360,000 acres of mountains and slot canyons, sandstone outcroppings, and rugged backcountry between Lake Mead and the Grand Canyon-Parashant National Monument. It’s habitable to desert tortoise, bighorn sheep, rattlesnake, fox, and coyote, as well as Joshua trees, Mojave yucca, and plenty more flora and fauna that call the harsh terrain home.

In addition, Native Americans have made use of the area for thousands of years, leaving behind pottery and other artifacts, as well as intriguing and mysterious petroglyphs (rock art), including the famous Falling Man.

The hike was led by Nancy Hall (above), executive director of the conservation group, Friends of Gold Butte.

For more than a decade, Nancy and her organization have been campaigning for the permanent protection of Gold Butte and for a visitor’s center in Mesquite that would provide education and support for visitors.

So it was worth celebrating when Sen. Harry Reid (D-NV) introduced a bill to Congress in May that calls for the federal designation of Gold Butte as a National Conservation Area. Reid called Gold Butte “Nevada’s piece of the Grand Canyon.”

According to the Friends of Gold Butte, achieving NCA designation would be important because it would establish a comprehensive management plan for the area, helping to protect its cultural and natural resources. It also “brings prestige and greater public awareness to the area, and provides resources to make Gold Butte—and more than 500 miles of trails—more accessible to outdoor enthusiasts, including hikers, hunters, campers and off-roaders.”

A glimpse of the petroglyphs alone is worth the trip. 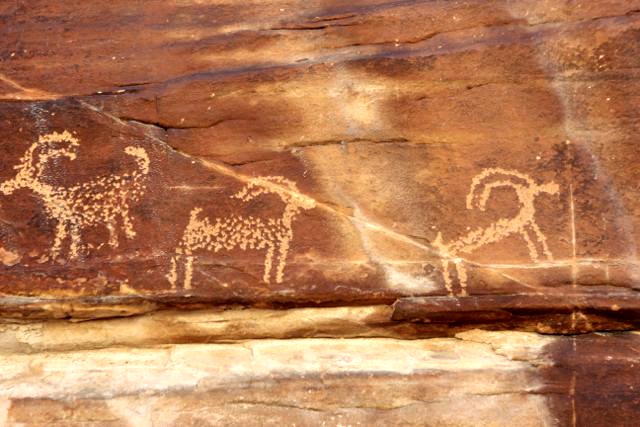 Getting to Gold Butte

NOTE: Gold Butte is rugged backcountry. There are no restroom facilities or water available, so please come prepared. While there are paved roads throughout the area, many of the back roads are not accessible for anything but a 4×4 or desert vehicle. Please stop at the BLM office in Las Vegas for a map of the area and additional info.