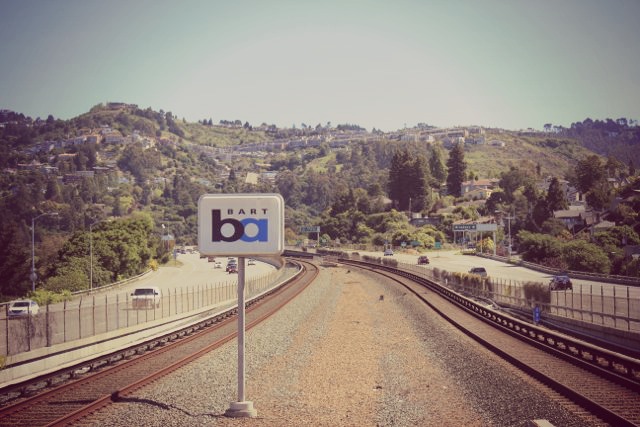 Our trip to the San Francisco Bay Area last week was go-go-go! We had basically three days to see as much of Oakland, Berkeley, and San Francisco as we could, in hopes that we would narrow down the possible neighborhoods where we might want to live come fall.

It’s impossible to see one city in three days, let alone all three, but we still managed to do a lot.

Our flight, which clocked in at a pretty desirable $270 round-trip from Detroit to Oakland (quick layover in Vegas), landed around 11:30 p.m. on Saturday night, giving us just enough time to catch the last AirBART shuttle to the Coliseum BART station.

From there, we were to take the BART (Bay Area Rapid Transit) to the MacArthur station in north Oakland, just a few blocks from the cute Temescal apartment we found on AirBnb.

We got off the train, and walked up the stairs to the thumping city night at street level. Transvestite prostitutes posed for all those waiting at the bus station, a homeless man dug through trash, and corner boys called out the brands of whatever they were selling.

It didn’t take long to realize we’d gotten off at the wrong stop. (Unfortunately, we didn’t get any pictures of the scene.) 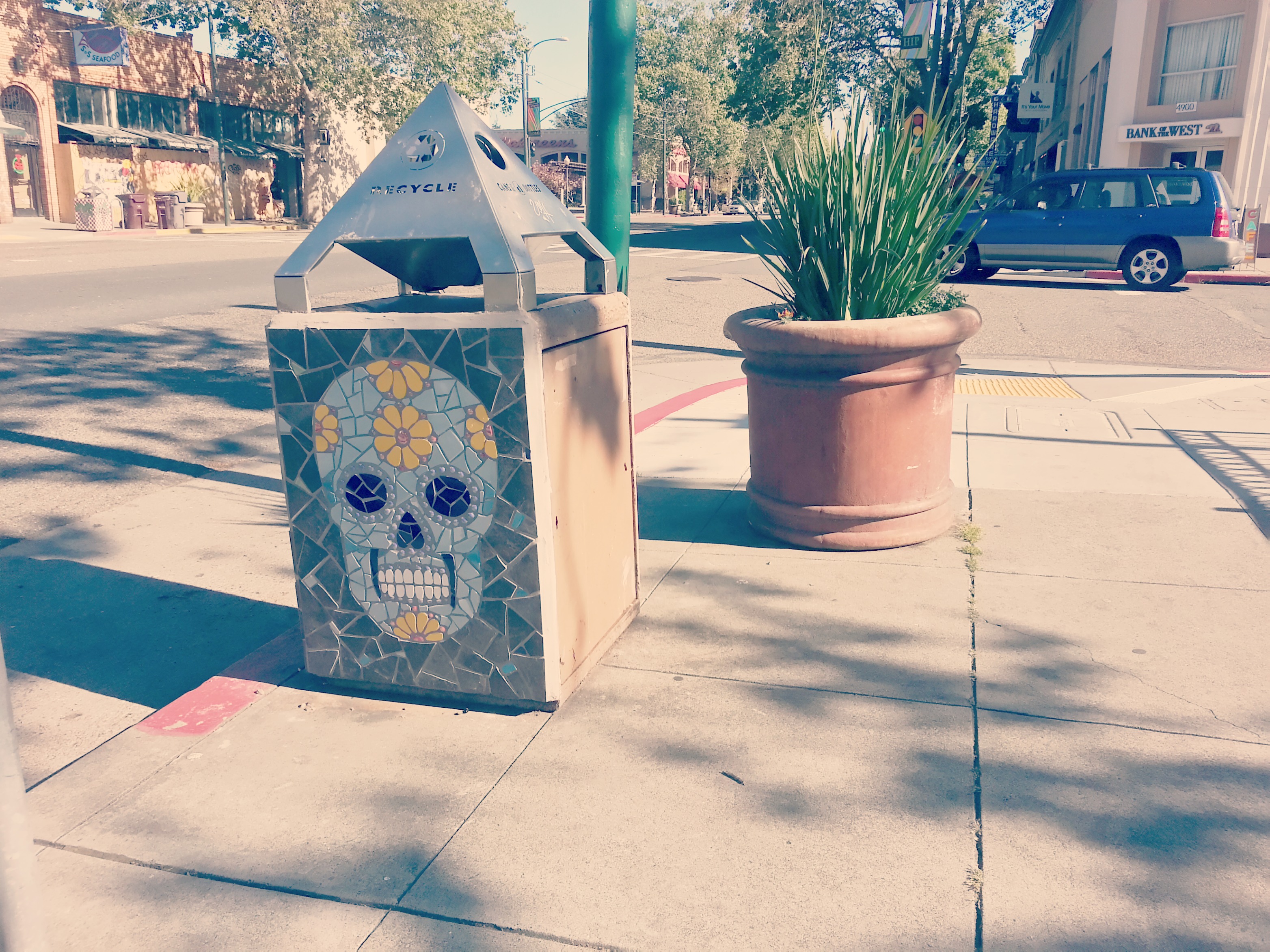 After realizing our error, we quickly hopped back on the BART and went the two extra stops to our destination.

We’d heard a lot online about Temescal and how it’s an up-and-coming north Oakland neighborhood, so we were excited to check it out early Sunday morning. 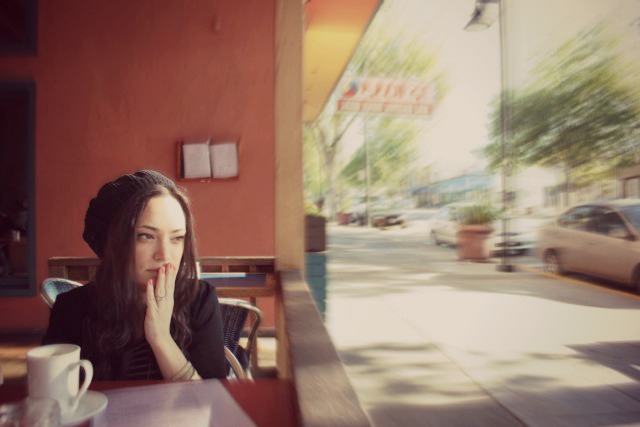 The day started with breakfast at Aunt Mary’s Cafe on Telegraph, just a few blocks from where we were staying. We’ve been told that weekend brunch can come with a long wait, but we got there super-early and managed to snag an outside table right away.

We ordered the “Southern Bubble & Squeak” (pictured below) and a daily special of fried grit cakes topped with eggs, thin ham, and red-eye gravy. 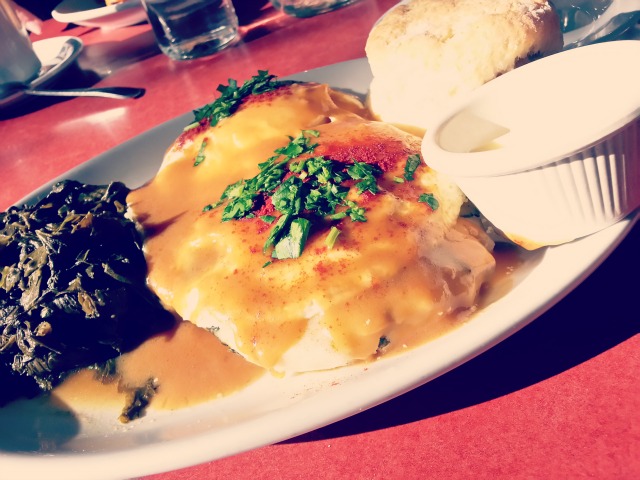 Both were pretty okay. A little pricey ($30 altogether) for a slightly-above-average, if a bit more soulful-than-usual breakfast.

The waitress looked like a supermodel though, so we were both okay with paying extra for the view.

After breakfast, we hit the Temescal (pronounced tem-ess-kull) streets, which were mostly deserted on this sunny Sunday morning. 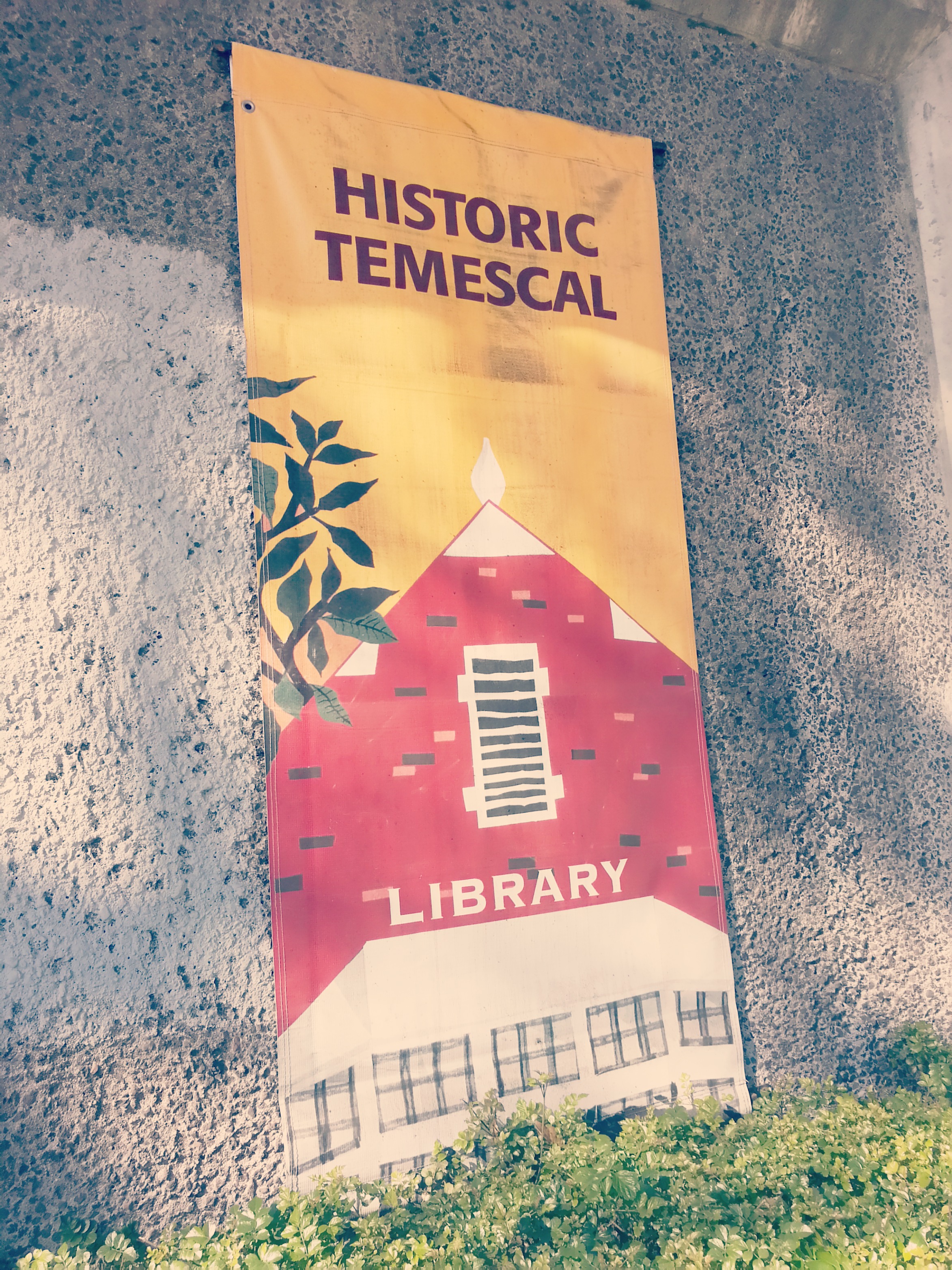 Throughout our stay, we noticed a few pockets of what seem to be pretty happenin’ restaurants and shops — including the best pizza Katie’s ever had — in the neighborhood, but not quite enough to really entice us to live there.

It’s still a little rough around the edges, and, with Katie likely doing a lot of walking and commuting alone, safety is one of our top priorities. 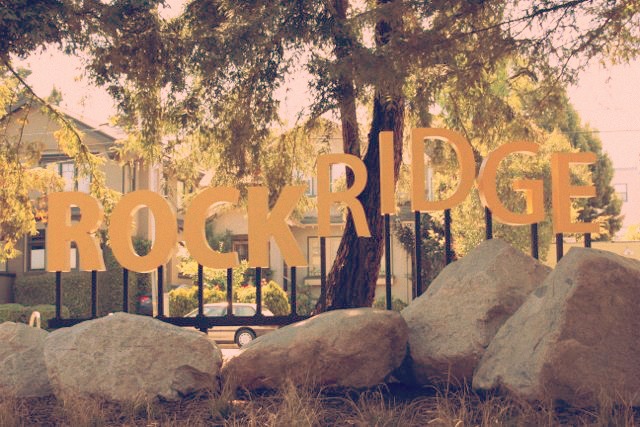 We walked around quite a bit — a little haphazardly — through Temescal and some of the surrounding residential neighborhoods.

Rockridge (sometimes referred to as Rich-ridge) is another north Oakland neighborhood that we’d heard a lot about, and its nickname is well-deserved. To us Oakland County folks, it brought to mind the tony Detroit suburb of Birmingham.

We grabbed a quick crepe (mostly just as an excuse to use the bathroom and rest our already tired feet) at Crepevine, and then decided to get the hell out of there. 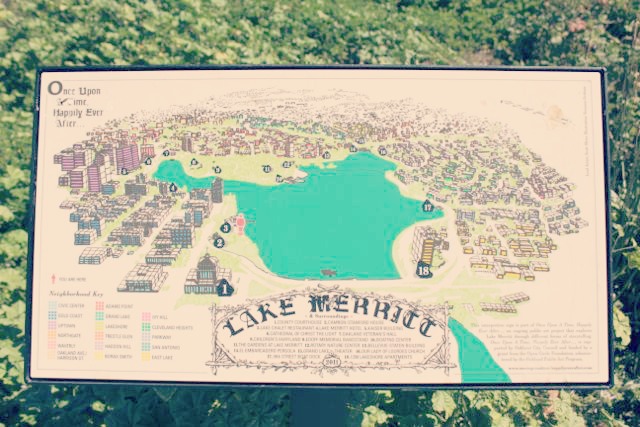 Next on our itinerary was the area surrounding Lake Merritt. Enchanted by the blossoming cherry trees and the Euro-inspired buildings surrounding parts of the lake, we decided to walk the entire diameter of the lake.

This was where we overdid it in terms of walking, and we’d be paying for it with pain for the remainder of the trip. 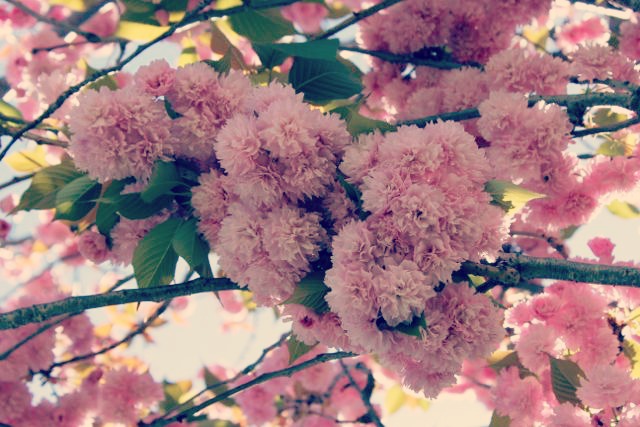 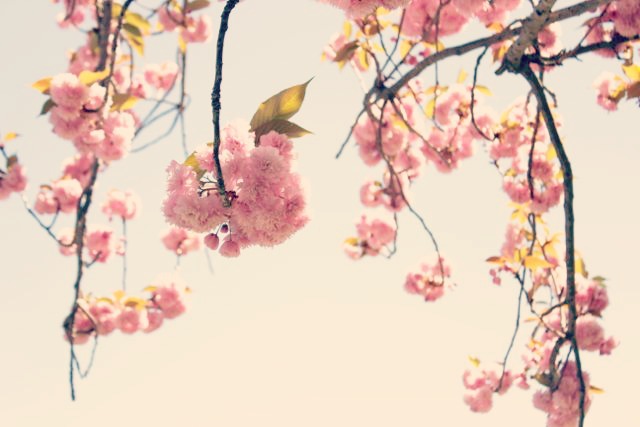 Still, the lake was one of our favorite spots that we’d seen in Oakland. In our minds, we were putting together all the places we would take our parents when they visited us in the future, and Lake Merritt was at the top of the list. 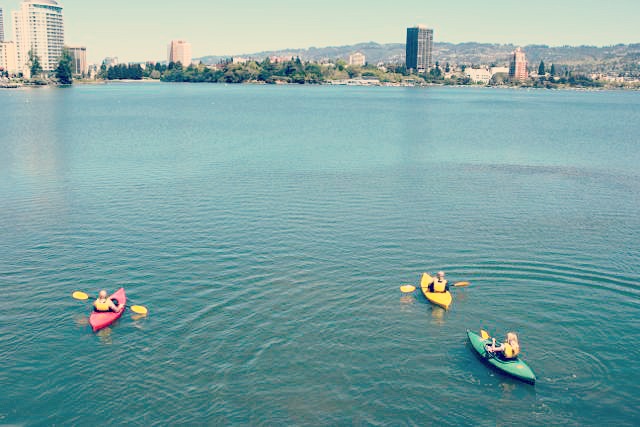 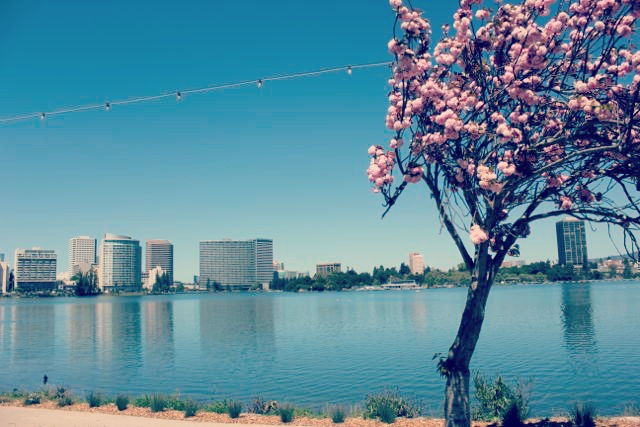 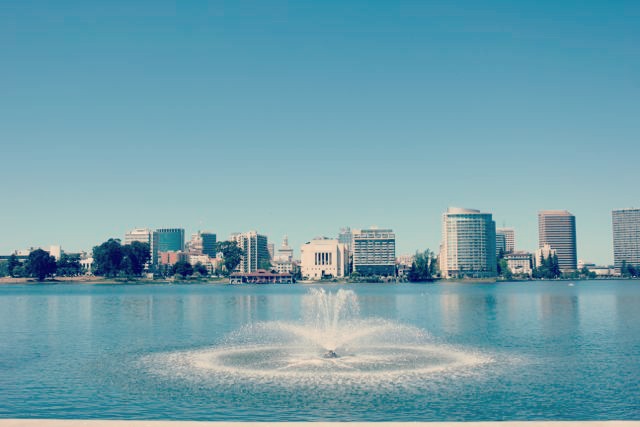 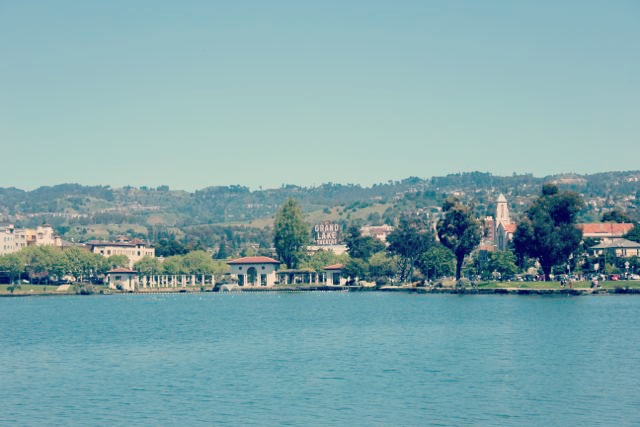 Even so, we eliminated the Lake Merritt from our list of possible neighborhoods to settle down in because of the relative difficulty of getting to the BART. 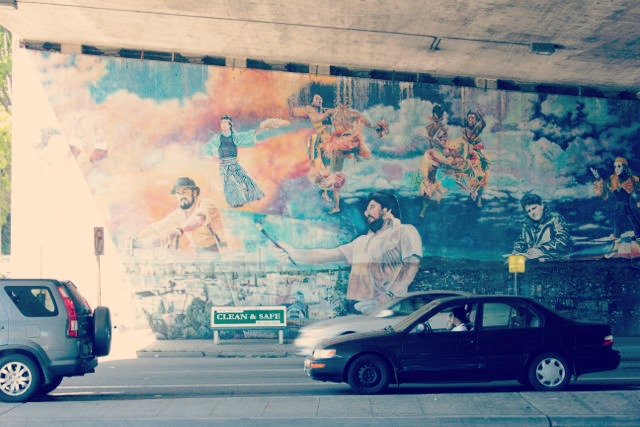 We headed a little bit farther north to the Grand/Lake Shore neighborhood, which we enjoyed the most out of all the spots we saw near the lake because of its abundance of hip boutiques, ethnic restaurants, and cafes.

We did the math, though, and realized it would take Mark close to an hour to commute to school via public transportation. 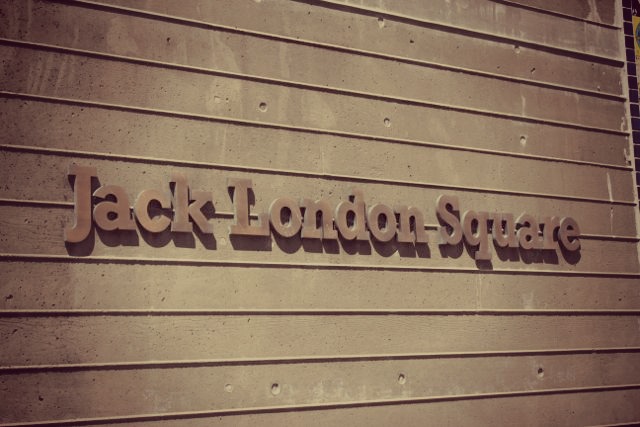 We ended our Oakland adventure at Jack London Square, a recently developed waterfront district that features popular restaurants, artisan markets, and a marina.

We happened upon a farmers’ market and boat show in progress. 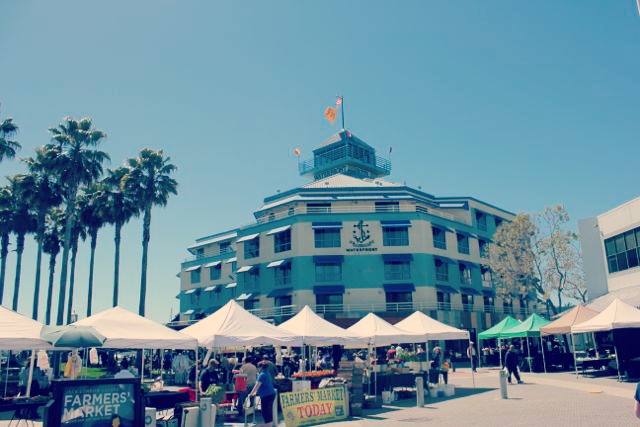 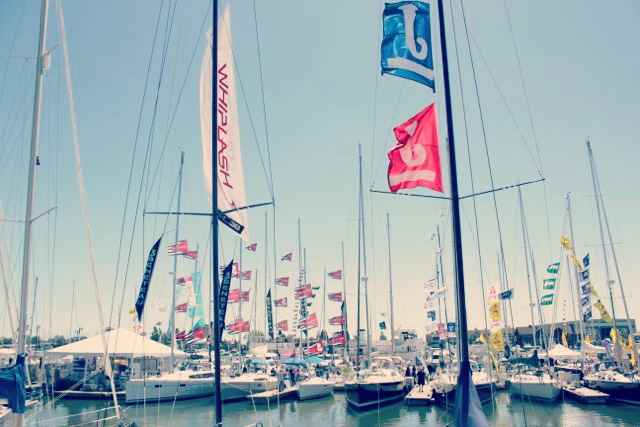 Having eaten and suffered through more Jimmy Buffet than either of us have ever cared to hear (and generally feeling wiped out from walking all day), we found a shady spot underneath some palm trees and took a nap. 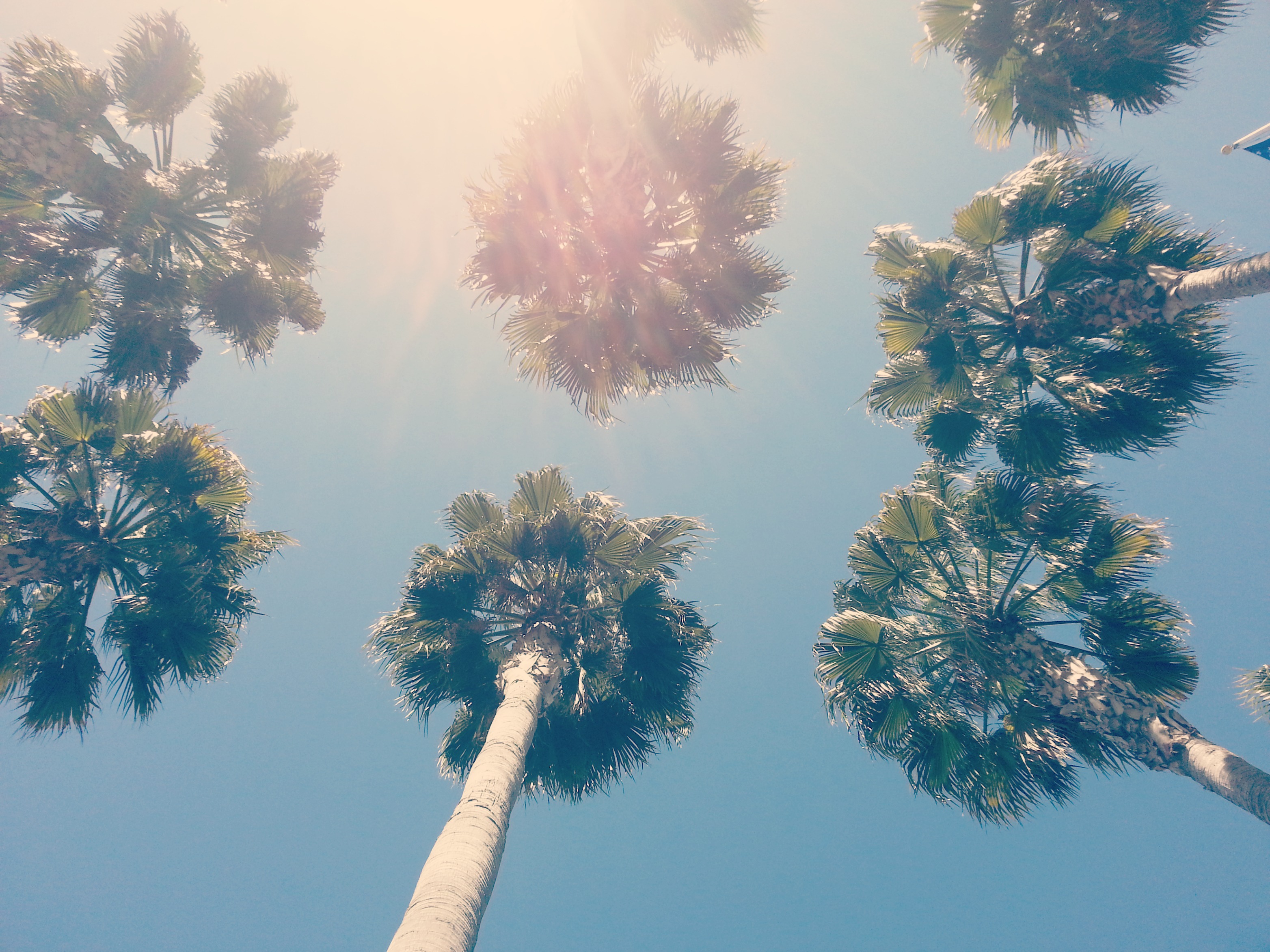 Our next major error happened upon waking up, when we decided to cross the Bay for a few hours to see what San Francisco had to offer.

More on that later… 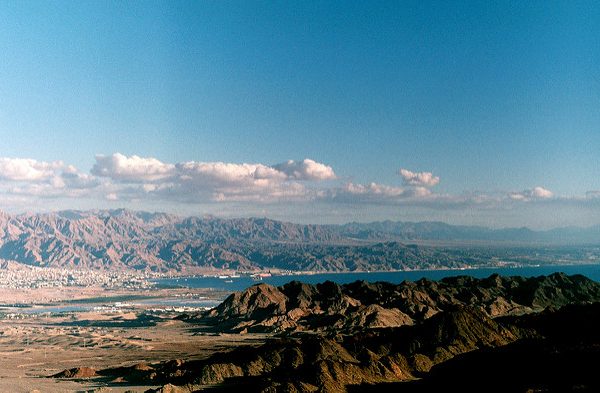 When it comes to hiking in Israel, there are a number of trails to choose from that trek through the … 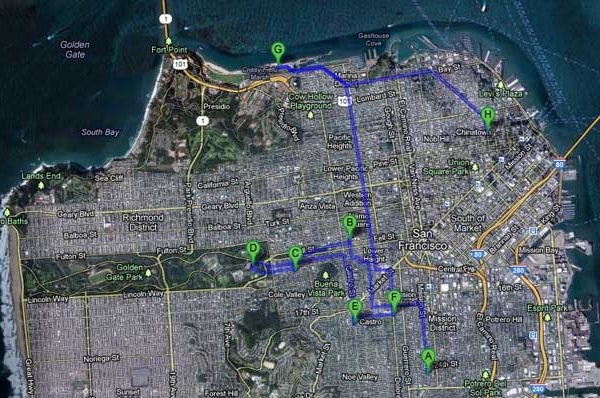 Our last day in the Bay Area was dedicated entirely to San Francisco. We didn’t have much of a plan …