A Day in the Life: WWOOFing in Hawaii 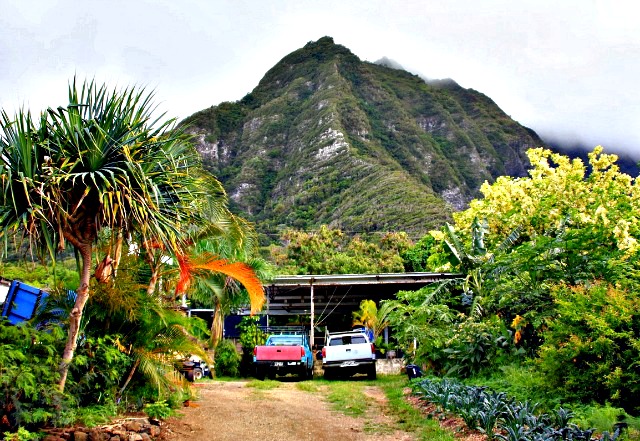 We spent the month of June working in Hawaii on Nalolicious Farm, a small start-up aquaponics farm in Waimanalo on Oahu’s windward side.

Last winter, we signed up for an account at WWOOF Hawaii, which allowed us to link up with farms looking for extra help. We’ll have a more in-depth post all about WWOOF (World Wide Opportunities on Organic Farms), but here are the basics: You sign up and find a host farm that sounds up your alley (they’re all over the world) and make arrangements to come stay and work on the farm. In exchange for your part-time labor, the farm typically provides you with food and lodging.

Our arrangement with Nalolicious turned out to be great. We worked 25 hours a week tending to the farm — taking care of rabbits, chickens, and fish; planting and harvesting vegetables; weeding gardens; turning compost, etc. — and they provided most meals, a tent to sleep in, and bathroom/shower facilities. It’s a great tradeoff: They received cheap labor, we got free accommodations while also learning a number of valuable farm skills.

Here’s a typical day in the life of a Hawaii WWOOFer: 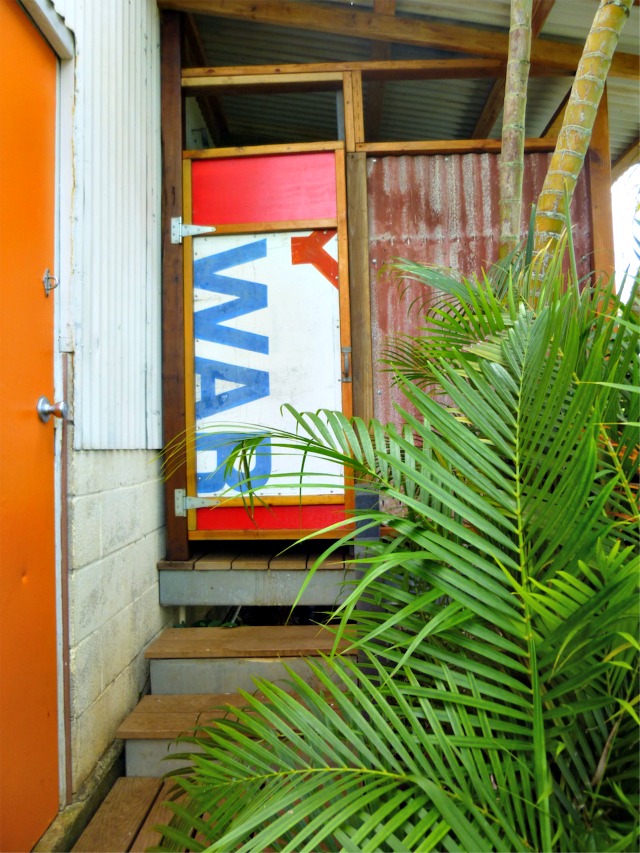 Everyone on the farm had their own unique way of describing the early morning sounds of the thousands of wild chickens that called a neighboring lot home: screams from a roller coaster as the cart was just beginning it’s speedy decline, a wild street brawl with a lot of cheering onlookers. Nevertheless,  although our wake-up call was scheduled for 6:30, we were usually awakened much earlier by the fecund fowl.

It’s also interesting to note just how quickly we humans tend to adjust to our conditions. On our first night on the farm, we were both a little frightened by the prospect of using a bathroom with no lock, or a shower room with a blanket for a door. But, a few days into our stay, the lack of locks didn’t phase us.

For most meals, we took turns cooking and cleaning up. Lunch and dinner were eaten communally, as were most other activities. Breakfast was the exception, where you fended for yourself. The food and kitchen were provided, you just had to make your own meal. 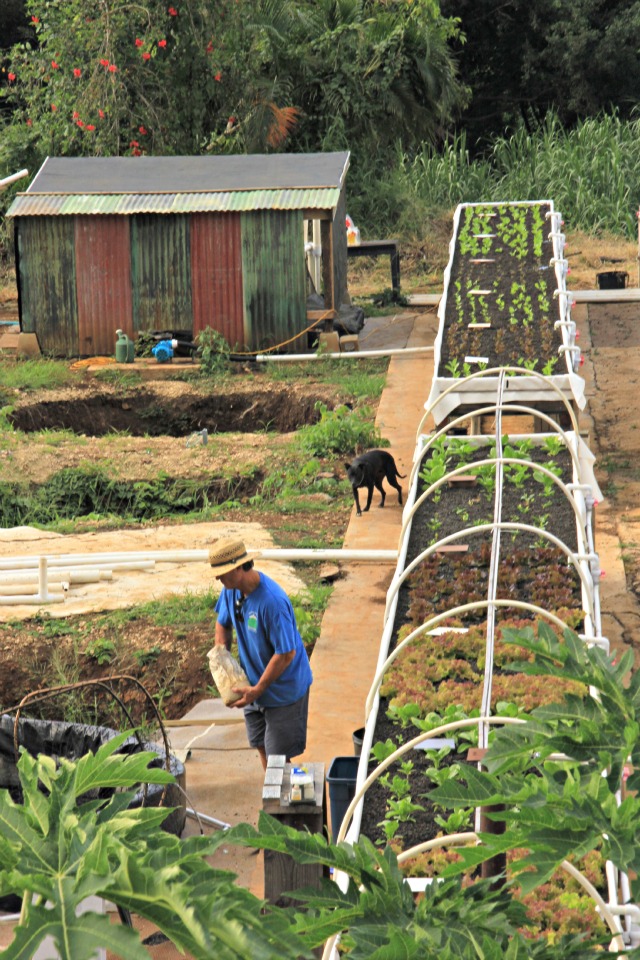 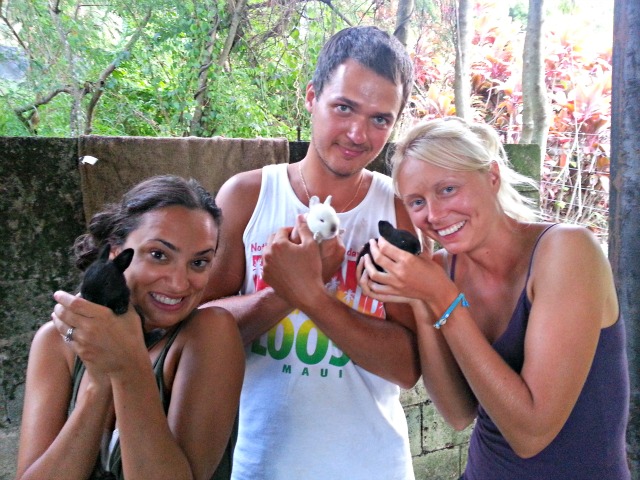 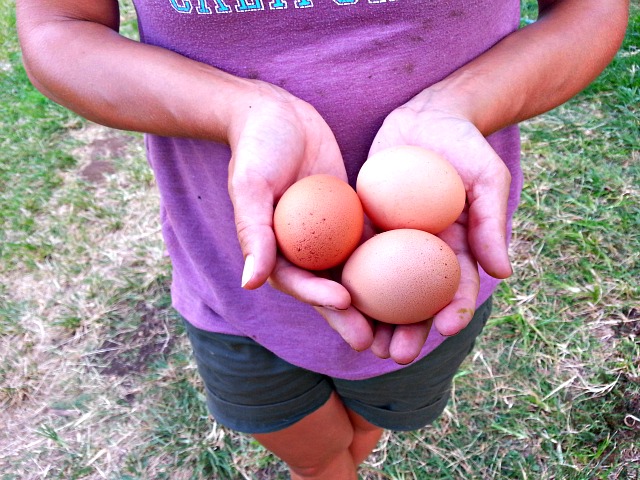 The work itself was not very difficult. We would take turns feeding the rabbits, fish, and chickens. Others would water the various soil plants and vegetables around the farm. Another would pick up after the dogs.

The least appealing job was managing the black soldier fly containers. You would take the food scraps from both houses on the property and dump them into these bio pods that produced BSF maggots. The maggots would crawl through a tube into a smaller container, which you removed from the pod to sort the maggots. Using a spoon or tongs, you would grab all the dark maggots and move them into a drying container. The white maggots were put back in the pod. Needless to say, the smell and the nature of the work weren’t very pleasant, especially because the BSF station was right next to the chickens. As you were separating maggots, the chickens would be squawking at you.

After the daily chores were done, we would move on to the various projects that needed to get done that day. These, too, were typically pretty painless: harvesting sunflower sprouts, planting and weeding garden beds, catching fish for market — nothing too strenuous.

The regular work week ran from Tuesdays to Fridays. Saturday and Sunday, being harvest days, were special — we would wake up at 4:45, before sunrise, to harvest the produce for that morning’s farmers market. After harvest, one or two lucky WOOFers get to work the farmer’s market with either one of the farm owners, John or Elko. 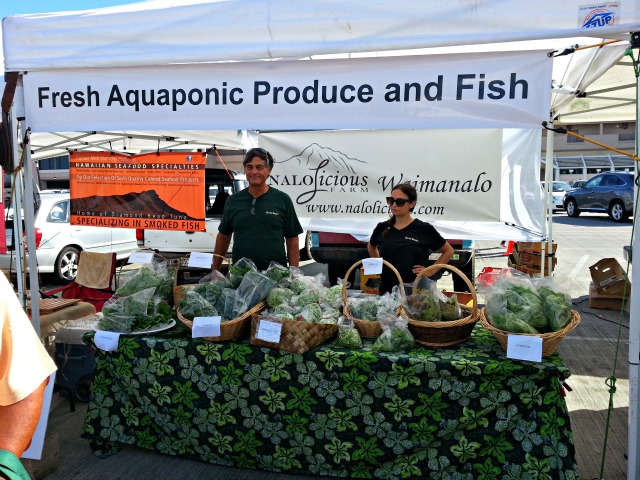 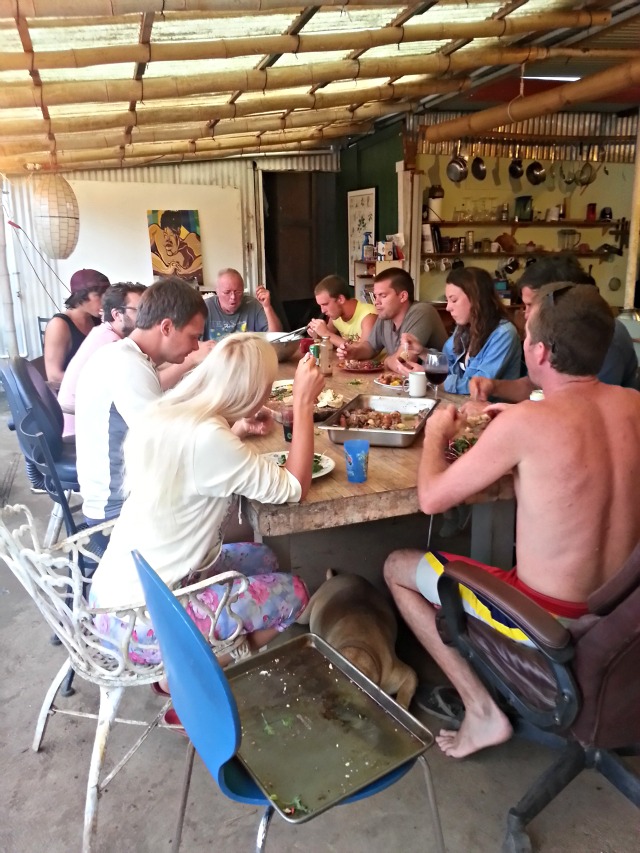 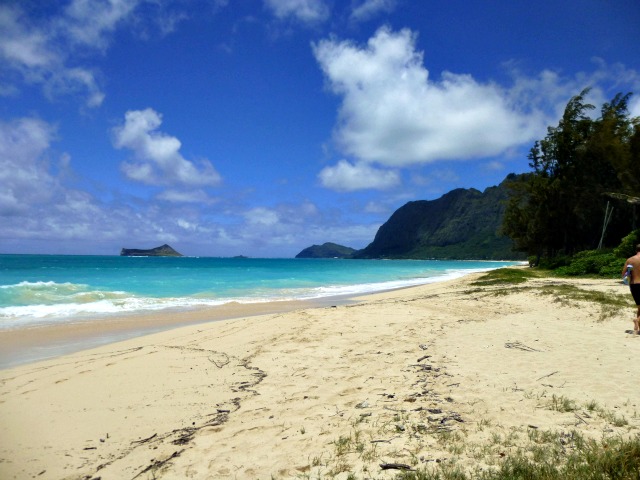 The work days were structured beautifully. After just three short hours of work, lunch — cooked by another WWOOFer — would be served and eaten as a group. After that, you had hours of free time to do as you pleased. The afternoon sun would be too hot and punishing for any farm work.

Instead, the afternoons were filled with beach time and relaxation. 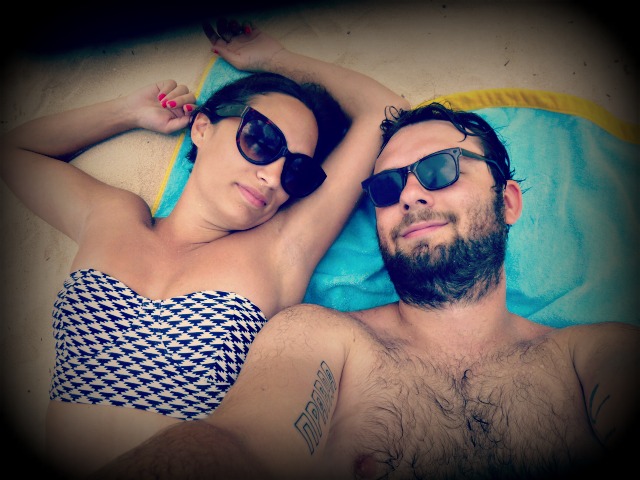 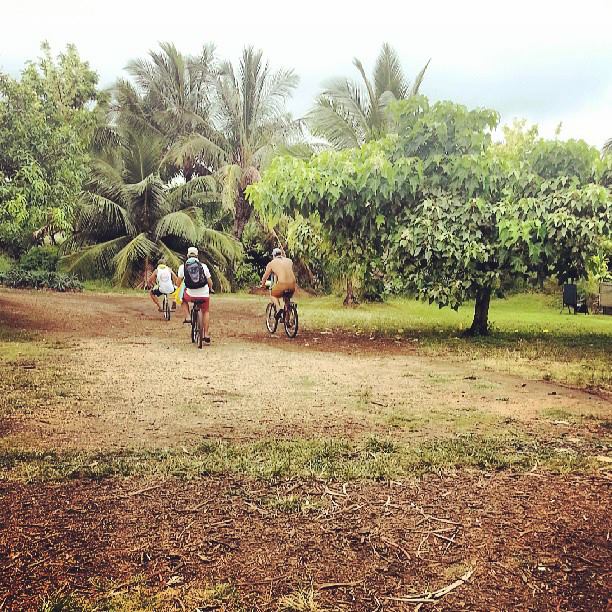 By the mid-afternoon, the sun would be at an angle that would allow us to work more comfortably. The projects of the day would be finished, and a similar evening round of feeding the animals would commence.

The afternoon session of work would be even shorter than the morning, lasting until just 5:30 p.m. 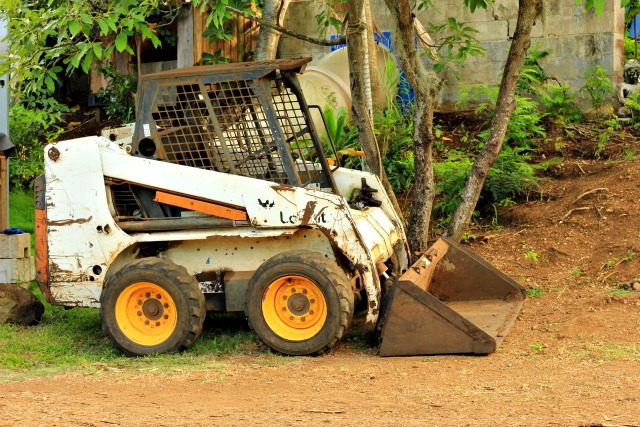 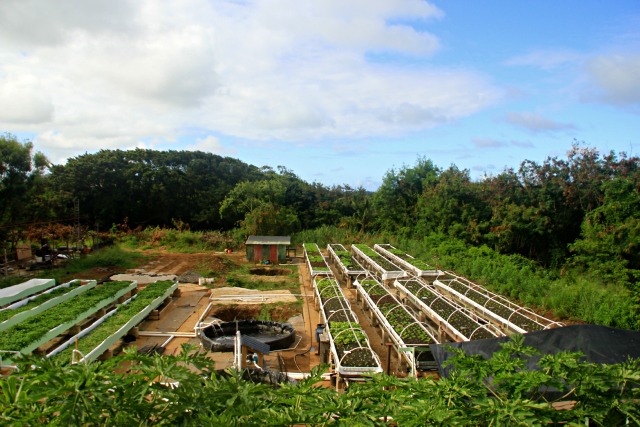 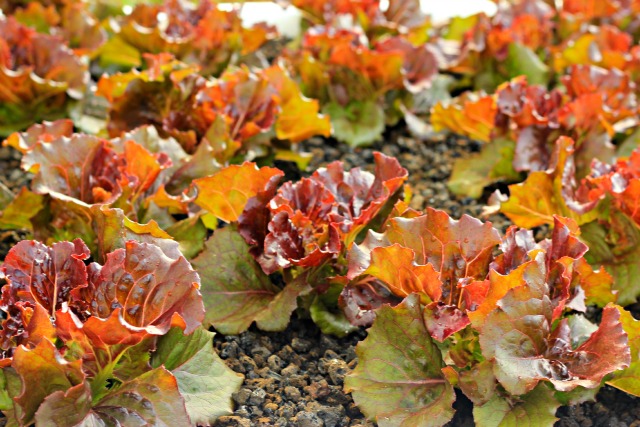 Typically, one or two members of the “farmily” cook for the rest of the group, but some days are declared “fend for yourself” days. In those cases, we went to Serg’s, a little Mexican place a short bikeride away. Best chicken nachos ever, pretty tasty fish tacos, and the most refreshing pineapple agua fresca! 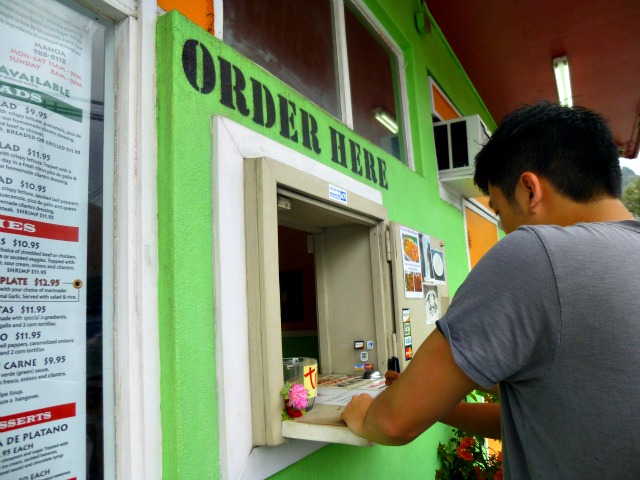 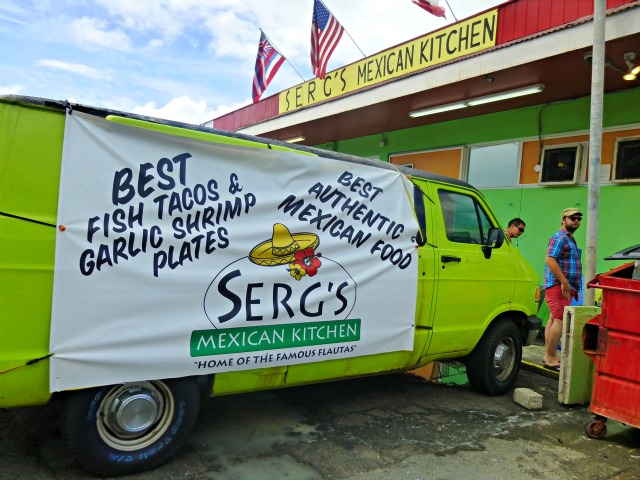 The rest of the day is yours to wrestle with one of the farm dogs, catch a bus into Honolulu, go for a hike, read in the hammock, write postcards, or do whatever else you want to do. 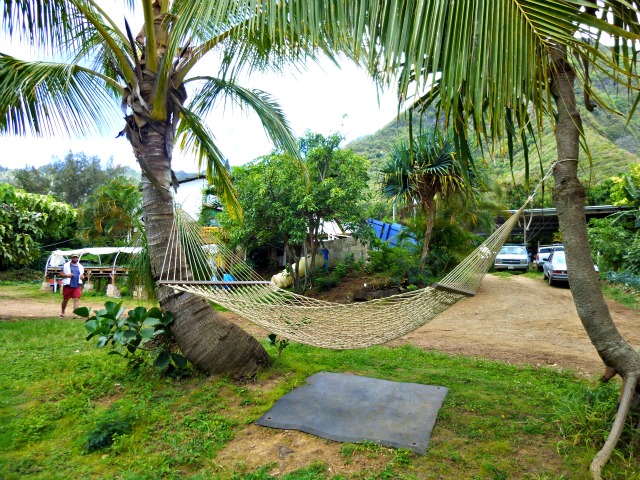 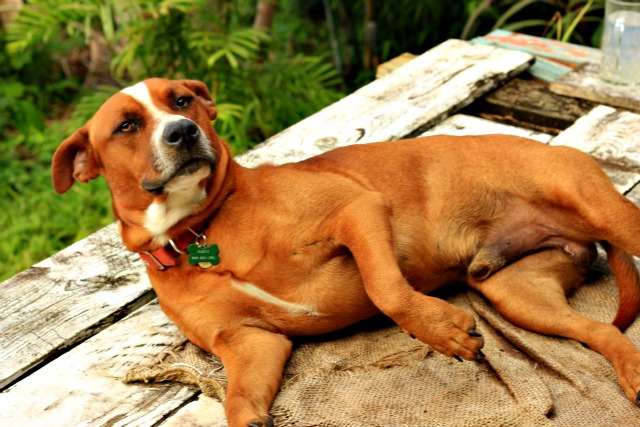 It gets dark early in Hawaii. By 7:30, it’s pitch black outside. The evening comes quickly, and 9 p.m. feels more like midnight. Plus, you have to wake up at the crack of dawn tomorrow, so get to bed! 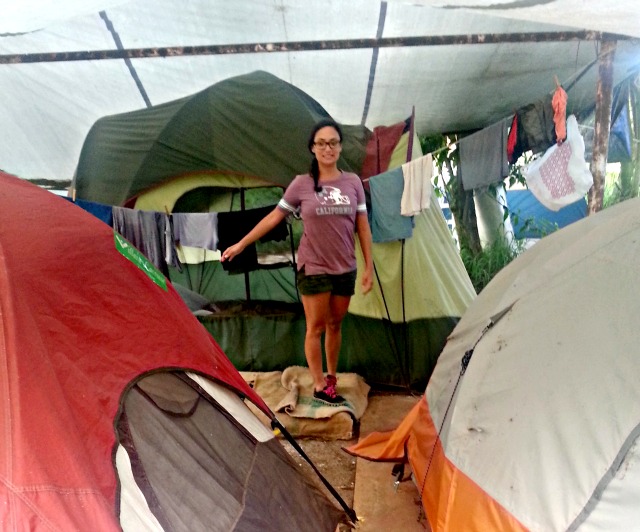 With the exception of Sundays and Mondays that’s pretty much how every day went. On Sundays, there’s a short morning harvest followed by morning chores. But lunch time is quitting time for the day. Mondays are even better — completely yours to do as you please and explore the beautiful island of Oahu.

Would you ever consider working on a farm for free accommodations? Let us know in the comments!